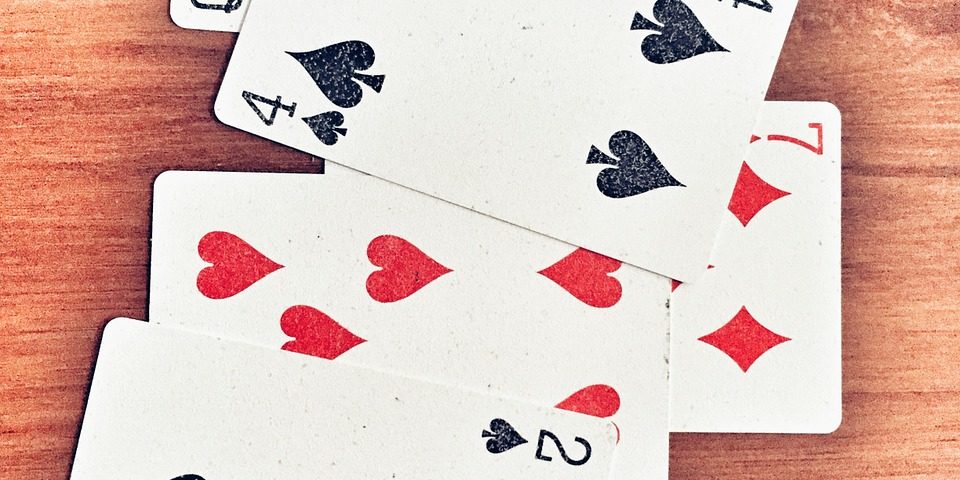 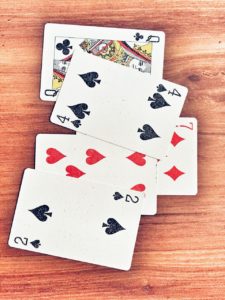 If the kids are bored when camping, you can always pull out a deck of cards. A deck of cards opens a lot of possibilities! So here are a few card games for camping kids.

Shuffle the deck and deal 5 cards to each person. This is a game where more people tends to mean more fun. The goal is to be the first person to run out of cards. In order to get rid of those cards, you have to find a match. That is, if you have two 8s then that’s a match, or if you have two Kings. In order to make those matches, you ask other players if they have a card to match yours. If they do, they give you the card and then you place down the match.

But be careful! If your opponent says “Go Fish”, that means they don’t have a match! If this happens, you have to draw a card from the deck. Some people use a rule stating you have to draw until you find a match, but that’s up to how you want to play. Others play by a rule stating that you may play a match if you draw it. Either way, your turn has ended.

War is similar to Go Fish, at least in goal. In order to win, you have to be the first to get rid of all the cards in your hand. Hand each person five cards, just like in Go Fish. To start, you take the card on the top of the deck and turn it over face up. Set the card next to the deck, this will be the “discard” pile.

These are just two card games for camping kids. There are others, so just remember to keep a deck of cards around!

The 5 Essential Elements of a Great Campsite
December 21, 2022

Choosing The Right Camper Van For Your Needs
October 1, 2022

Fun Camping Games To Play With The Family
September 25, 2022

Winter Camping in Montana is Breathtaking
December 30, 2018
Go to Top
We use cookies on our website to give you the most relevant experience by remembering your preferences and repeat visits. By clicking “Accept All”, you consent to the use of ALL the cookies. However, you may visit "Cookie Settings" to provide a controlled consent.
Cookie SettingsAccept All
Manage consent

This website uses cookies to improve your experience while you navigate through the website. Out of these, the cookies that are categorized as necessary are stored on your browser as they are essential for the working of basic functionalities of the website. We also use third-party cookies that help us analyze and understand how you use this website. These cookies will be stored in your browser only with your consent. You also have the option to opt-out of these cookies. But opting out of some of these cookies may affect your browsing experience.
Necessary Always Enabled
Necessary cookies are absolutely essential for the website to function properly. These cookies ensure basic functionalities and security features of the website, anonymously.
Functional
Functional cookies help to perform certain functionalities like sharing the content of the website on social media platforms, collect feedbacks, and other third-party features.
Performance
Performance cookies are used to understand and analyze the key performance indexes of the website which helps in delivering a better user experience for the visitors.
Analytics
Analytical cookies are used to understand how visitors interact with the website. These cookies help provide information on metrics the number of visitors, bounce rate, traffic source, etc.
Advertisement
Advertisement cookies are used to provide visitors with relevant ads and marketing campaigns. These cookies track visitors across websites and collect information to provide customized ads.
Others
Other uncategorized cookies are those that are being analyzed and have not been classified into a category as yet.
SAVE & ACCEPT