Dutch Oven Cooking at the Campsite 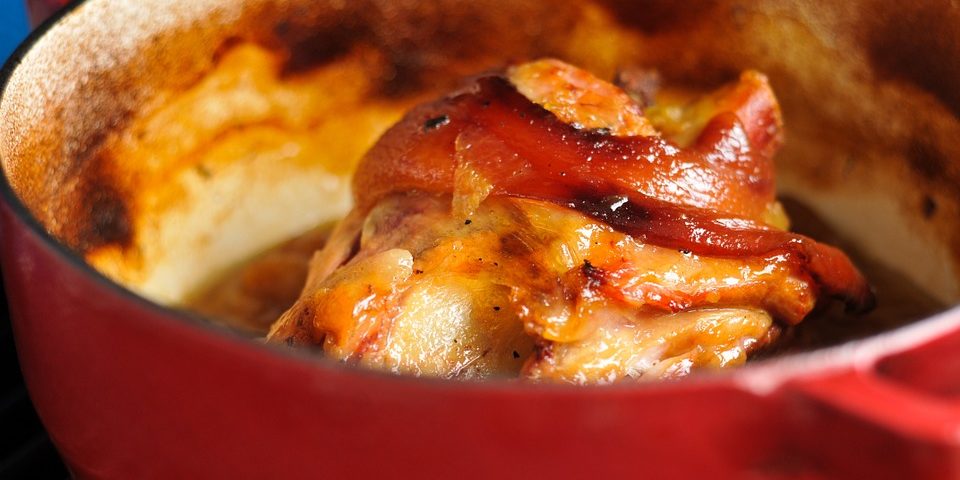 Dutch Ovens have been around for a long time and there is a good reason for it. Many people have Dutch Ovens that have been handed down from their parents or grandparents. They are nearly indestructible, can withstand very high temperatures, and make a really mean one-pot-meal.

The meals you can cook in them are not limited to a robust chili, though it’s delicious. You can even make desserts in your Dutch Oven. Imagine making a tasty Peach Cobbler for the whole family while camping. You’ll be the hit of the trip. We see a lot of crafty meals around the campfire and found some recipes you might like to try.

Baked Salmon
Your Salmon will be crowd pleasing with this recipe. You’ll layer Salmon strips, mushrooms, green onions, some cream cheese, and lemons, garlic and black pepper. Because it is fish, it won’t need to cook for long so keep an eye on it. Try this one the next time you are camping and we think it will become a family favorite.

Hot & Spicy Chicken
This mouth watering delight will come together in just over an hour or so. You start with two chickens which are quartered and skinned. You’ll be adding soy sauce, red wine vinegar, cloves, ginger, brown sugar, some cayenne and nutmeg. It is sweet, savory, and as hot as you’d like to make it.

One Pot Tortilla Breakfast
This is a mixture you will be creating to put on tortillas. You’ll need green and red peppers (or yellow works well too), some onion, packaged taco seasoning, evaporated milk, half a dozen eggs, some sour cream and a jar of salsa. The flavors will meld as you cook and the filling will make a delicious dinner in a soft tortilla.

Apple Crisp
For this, you can slice up some tasty apples. Seperately, you will combine flour, sugar, margarine, salt, cinnamon, brown sugar, and nutmeg into a crumble. Put this on top of the apple slices and soon you’ll have a mouth watering Dutch Oven Apple Crisp.

Fun Camping Games To Play With The Family
September 25, 2022

How To Be A Good Camping Neighbor
December 7, 2018

Organizing Your Group
November 24, 2018
Go to Top
We use cookies on our website to give you the most relevant experience by remembering your preferences and repeat visits. By clicking “Accept All”, you consent to the use of ALL the cookies. However, you may visit "Cookie Settings" to provide a controlled consent.
Cookie SettingsAccept All
Manage consent

This website uses cookies to improve your experience while you navigate through the website. Out of these, the cookies that are categorized as necessary are stored on your browser as they are essential for the working of basic functionalities of the website. We also use third-party cookies that help us analyze and understand how you use this website. These cookies will be stored in your browser only with your consent. You also have the option to opt-out of these cookies. But opting out of some of these cookies may affect your browsing experience.
Necessary Always Enabled
Necessary cookies are absolutely essential for the website to function properly. These cookies ensure basic functionalities and security features of the website, anonymously.
Functional
Functional cookies help to perform certain functionalities like sharing the content of the website on social media platforms, collect feedbacks, and other third-party features.
Performance
Performance cookies are used to understand and analyze the key performance indexes of the website which helps in delivering a better user experience for the visitors.
Analytics
Analytical cookies are used to understand how visitors interact with the website. These cookies help provide information on metrics the number of visitors, bounce rate, traffic source, etc.
Advertisement
Advertisement cookies are used to provide visitors with relevant ads and marketing campaigns. These cookies track visitors across websites and collect information to provide customized ads.
Others
Other uncategorized cookies are those that are being analyzed and have not been classified into a category as yet.
SAVE & ACCEPT